The success of The Shandon Hotel and Spa has been incredible since it officially re-opened under new management. 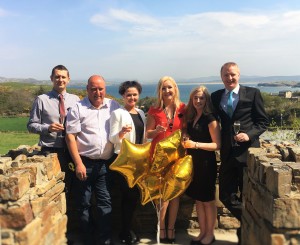 The spectacular Spa facility at The Shandon re-opened last August, and recently celebrated its first birthday.

The Hotel officially re-opened in March of this year, and has already hosted its first wedding, and is earning rave reviews for its amazing food.

With the stunning Marble Hill beach in the backdrop, The Shandon is one of the most scenic hotels, not only in Donegal, but in the entire country.

Today, management at The Shandon received confirmation that it has been named the Luxury Hotel and Spa of the Year!

Kerry Payne, from The Luxury Travel Guide Awards said, “We are delighted to pay tribute to and commend all those who have excelled in the industry. This year has seen an unprecedented number of shortlisted companies, providing strong competition in every category.

“All winners of the Luxury Travel Guide Awards are subject to the same rigorous assessment criteria, carried out by our in-house professionals. This ensures only the most deserving firms and individuals walk away with one of these prestigious accolades and gain a place in our awards winners’ guide, which will be distributed to over half a million professional & affluent people around the world.

General Manager of The Shandon Hotel & Spa, Carolynne Harrison told Donegal Daily, “The Luxury Travel Guide Awards represent the pinnacle of travel and tourism achievement, championing the best in their respective fields; therefore to come out on top is truly an achievement, that we’re extremely proud of.

“To win an International Luxury Travel award is just fantastic, and it’s a testament to all the hard work of all the staff and everybody associated with the Hotel and Spa.

“It’s also great exposure for Donegal Tourism as a whole, and the Wild Atlantic Way!!”