Where did it all begin? 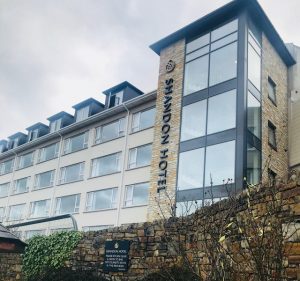 The Shandon Hotel & Spa re-opened to the public on the 25th March 2016 under new ownership, Mr Warren McCarthy.  Warren appointed Carolynne Harrison as General Manager of the resort pre opening in December 2015 and to this very day, she continues to nurture a highly talented, passionate team of hospitality professionals.

Warren is a very successful businessman in the construction trade in the UK, however he has strong family links to Dunfanaghy, County Donegal. Warren’s Mother Breda McCarthy originates from Sandhill in Dunfanaghy and Warren spent many summers holidaying in Dunfanaghy with his family and relatives who still reside here. Warren had fond memories of summers in the area and in the Shandon under previous ownership.

When Warren heard that the Shandon was for sale after going into receivership 4 years prior, he immediately seen the potential and without hesitation, he purchased the property and invested millions into its refurbishment, he recognised that its location, right on the Wild Atlantic Way was a real asset and he knew that with his own construction background, investment and the right people that he could create a product that would be an exceptional success. The Shandon was an instant hit with occupancy levels that would rival big cities. From the day it opened, it was decided that it will open through all seasons, maintaining the jobs of its 120 staff throughout the winter, where previously, it would have closed down. Due to the demands of the business, 2018 has seen the launch of a newly built restaurant on the second level, a new feature staircase to the front of the building which transforms the previously ‘dated’ exterior.

This new feature staircase offers access to a brand new floor which will provide the much needed space for an additional 18 newly built bedrooms which were completed in July 2018. 2018 also seen the branding of Beats Bar, JonJo’s Bar and Marbles Restaurant. Warren named each of these outlets himself with special meanings for each. Beats bar is named after Warren’s Grandmother Beatrice McColgan who lived all her life in Dunfanaghy, JonJo’s bar is named fondly after his Grandfathers John McCarthy & Joseph McColgan on each side of the family and Marbles is named after the popular blue flag beach situated a short stroll from the resort and viewable from every window in the restaurant. The resort has won many awards and accolades since it was re-launched in 2016 and has been going from strength to strength. It is currently ranked 12th in Irelands top Hotels by Tripadvisor which puts the resort in the top 1% of the best hotels in Ireland.